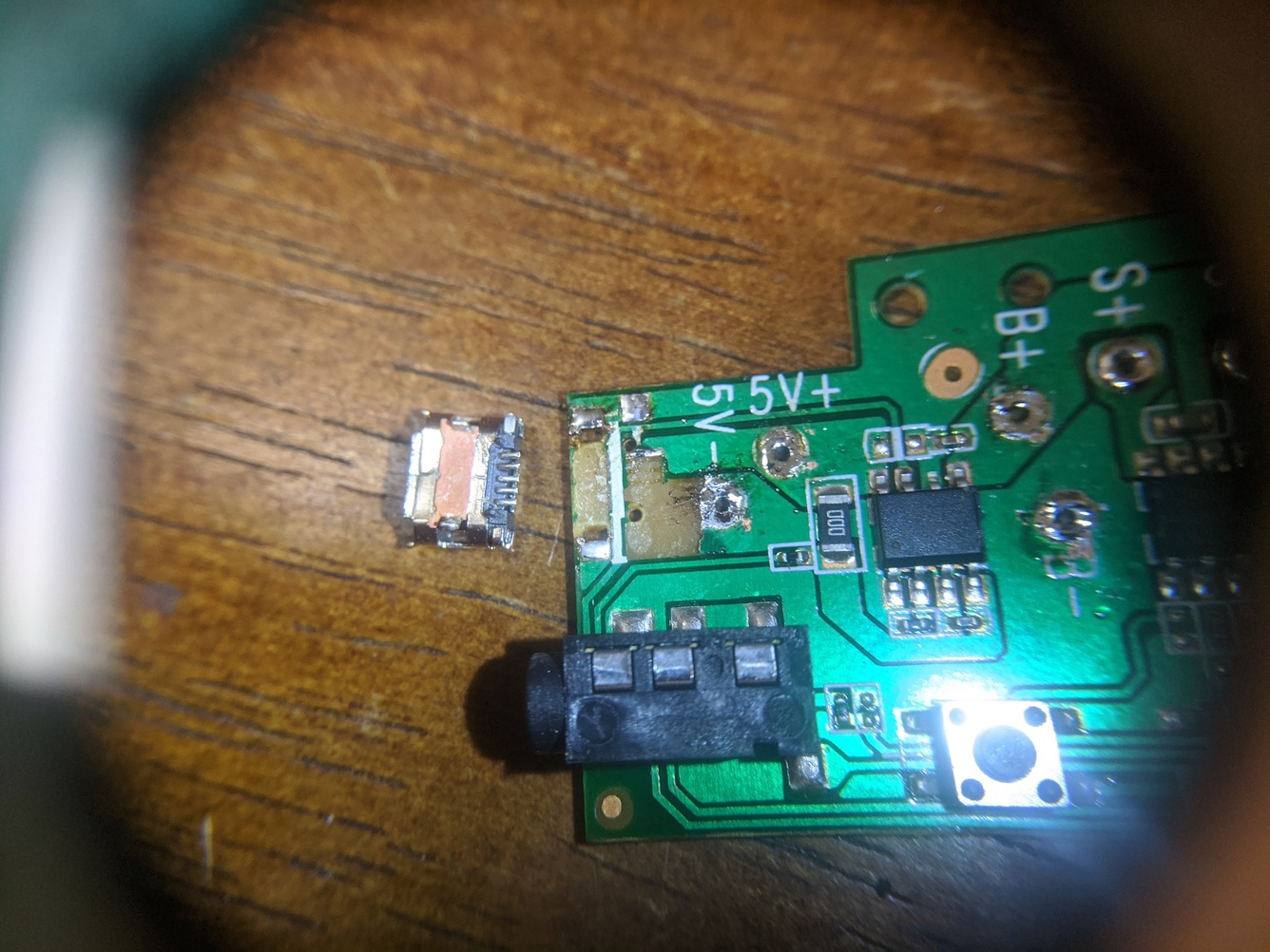 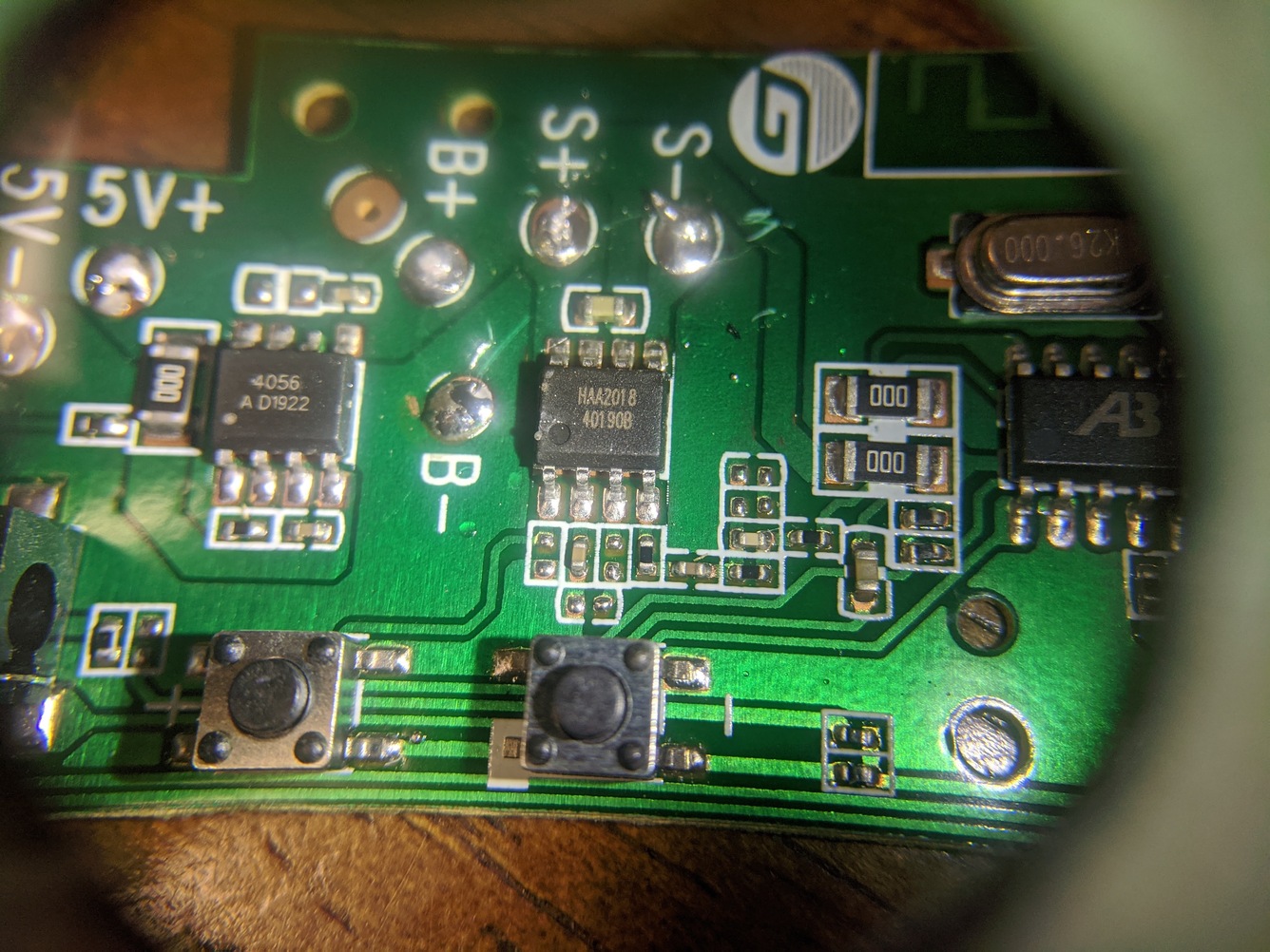 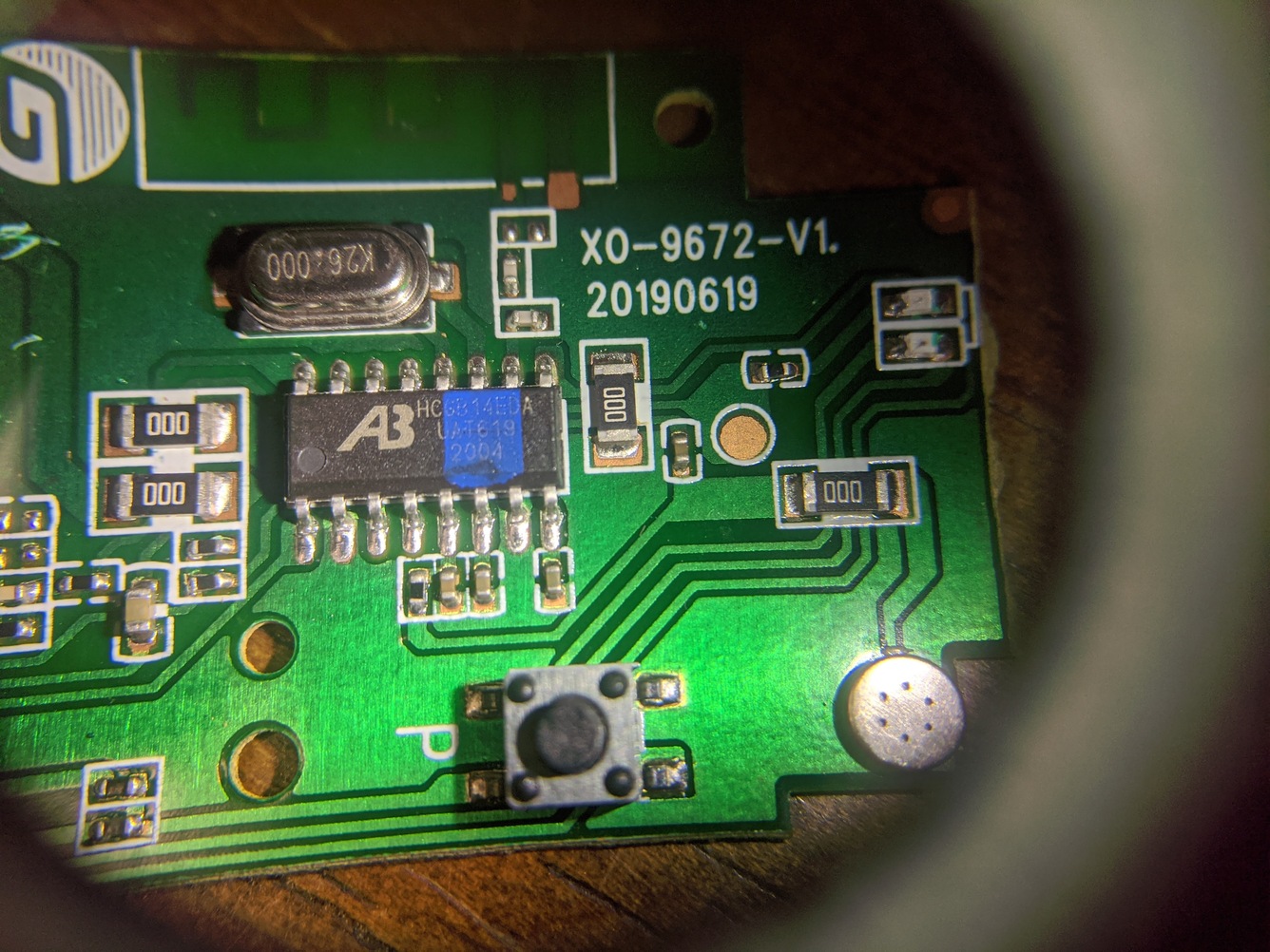 This thing1 was surprisingly simply constructed and easy to repair. Fortunately the USB data lines were unnecessary, only the power circuitry mattered. Even better, these lines are on the extremes and well spaced. I had no doubts repairing this device, there was no real mystery about the issue. Heroicly, it was even repaired before using all of the remaining charge. I guess the music does that to you. 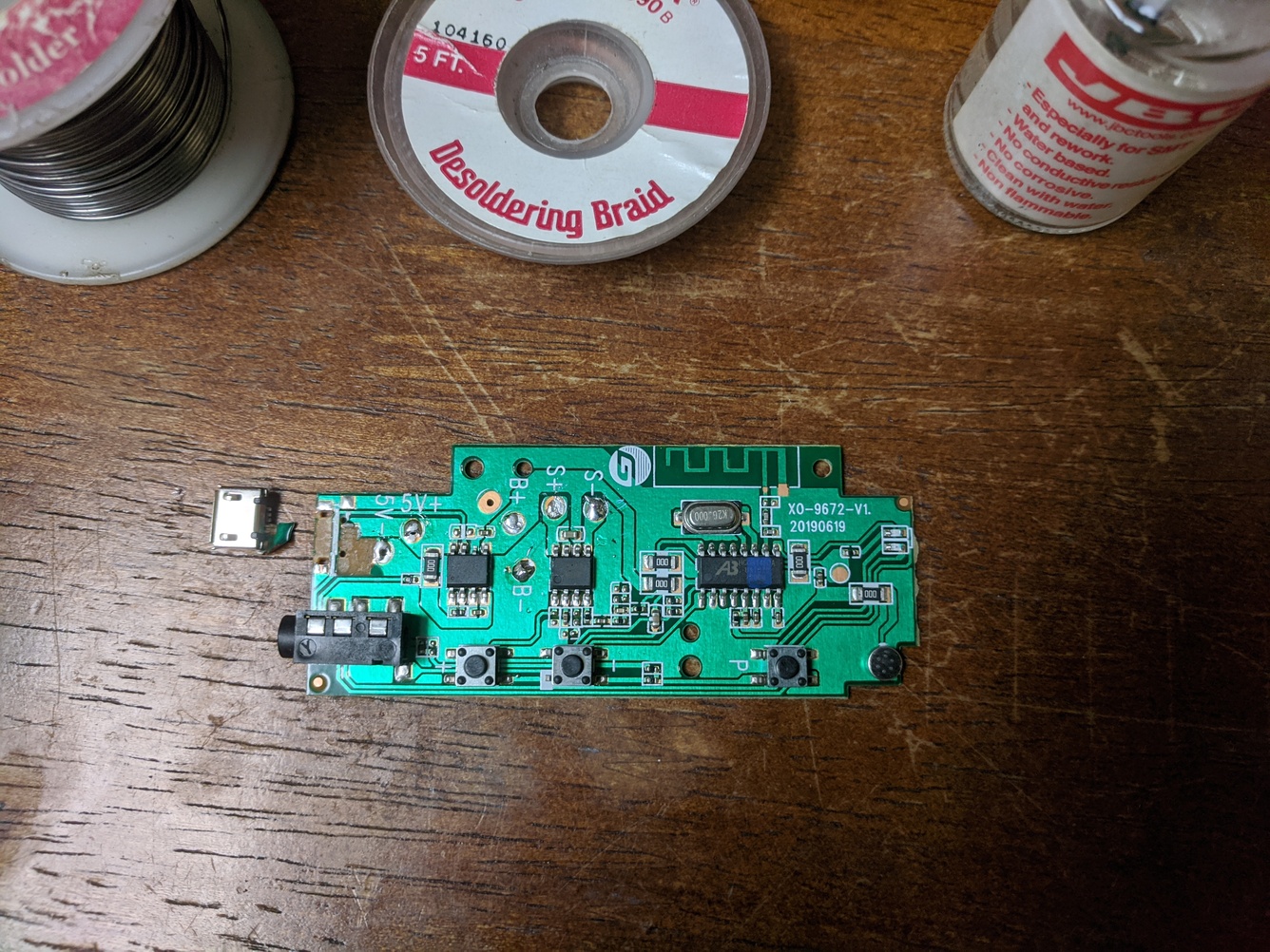 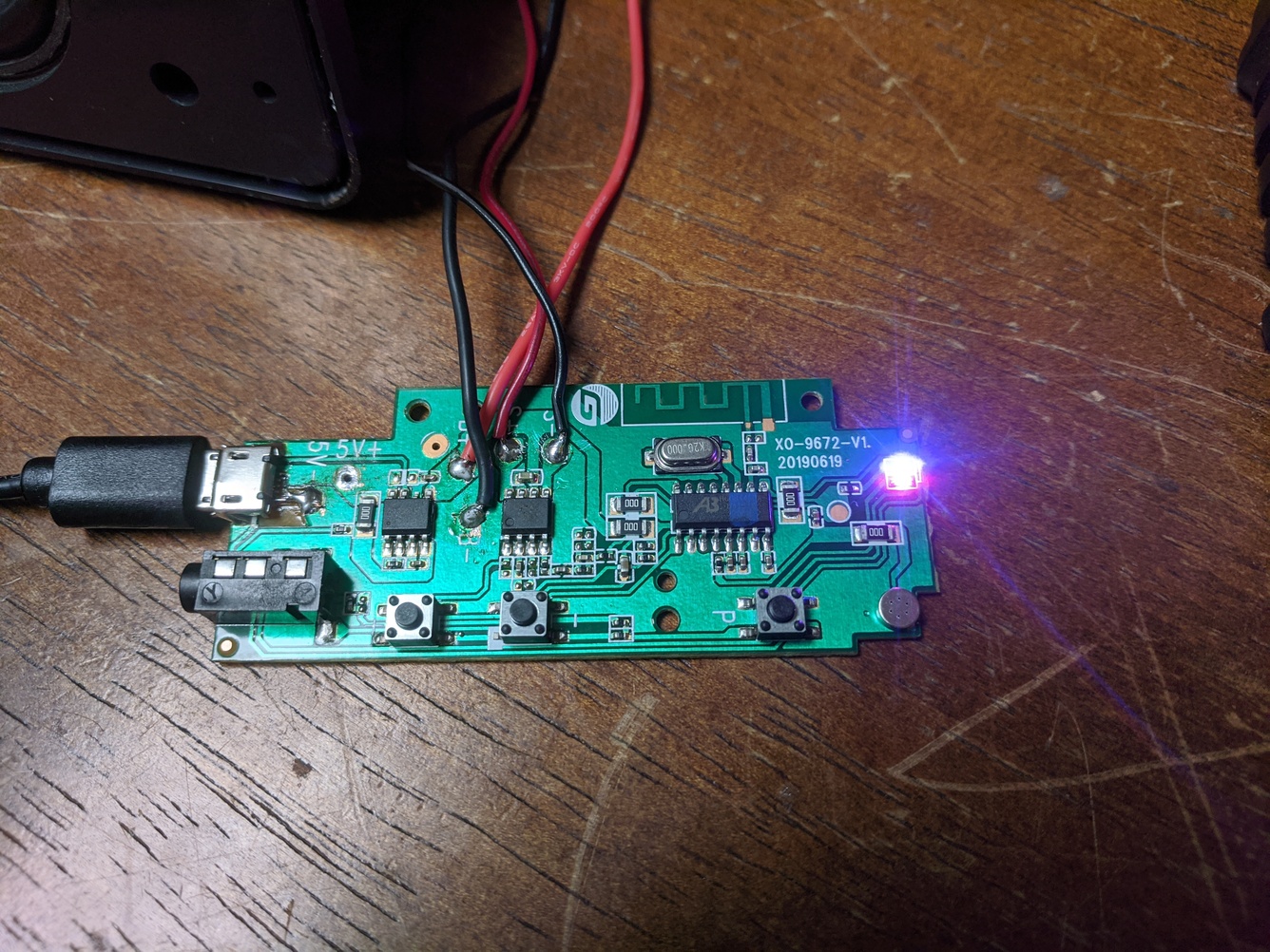 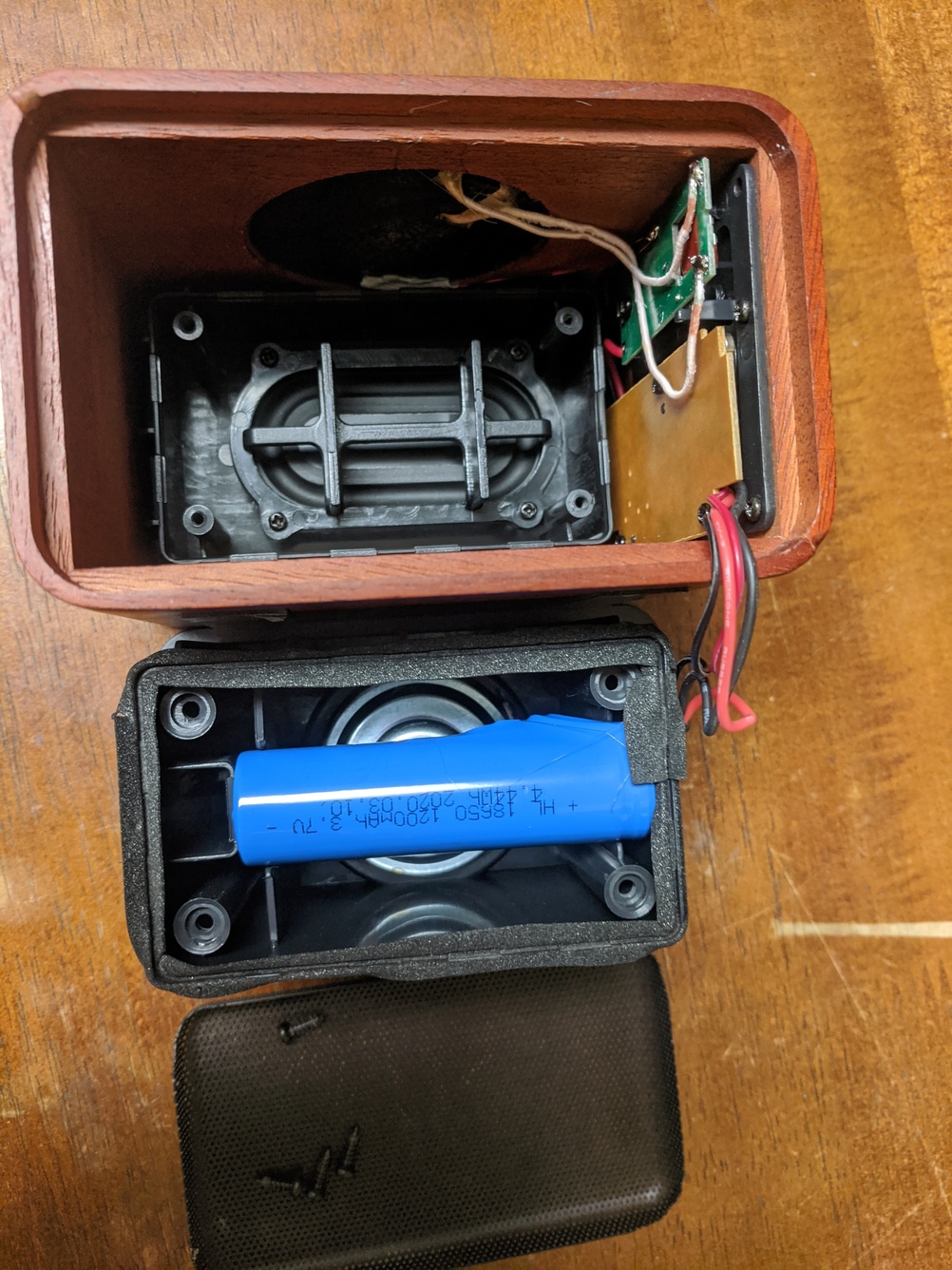 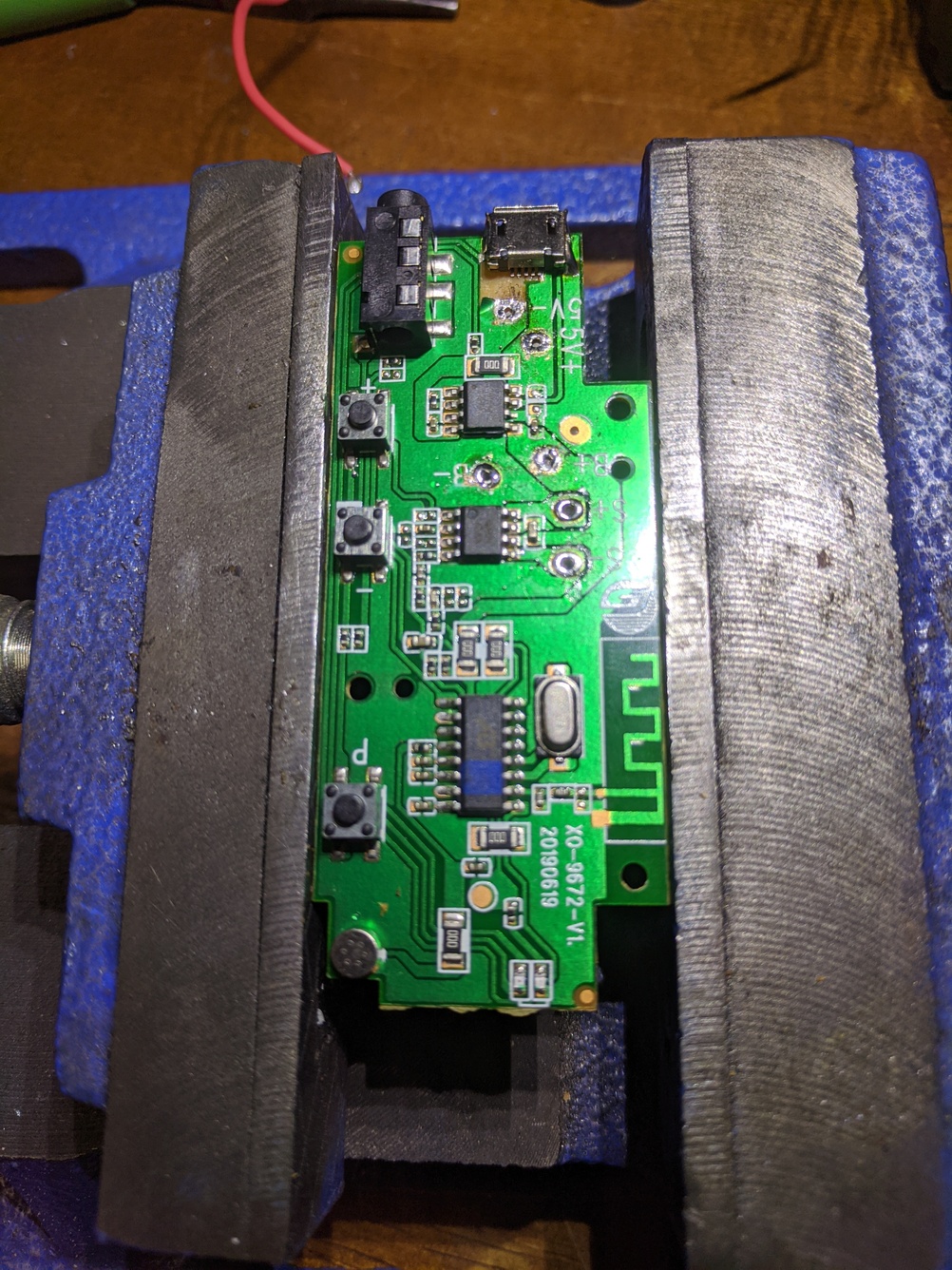 More music. But this one’s inexplicable: shortly out-of-warranty, my game-changing over-the-ear/noise-cancelling headphones suffers similar fate. Moving from a zero-headphone situation, at a desk in an open office and pretty much everywhere else the Bose QuietComfort 35 served me excellently, until suddenly it didn’t: the headset stopped accepting a charge.

Built encumbered and by liars and spies2, the fantastic headphones went from a daily tool to a neat looking brick with a flashy red light in less than a day, and ultimately unresponsive entirely a few weeks later. 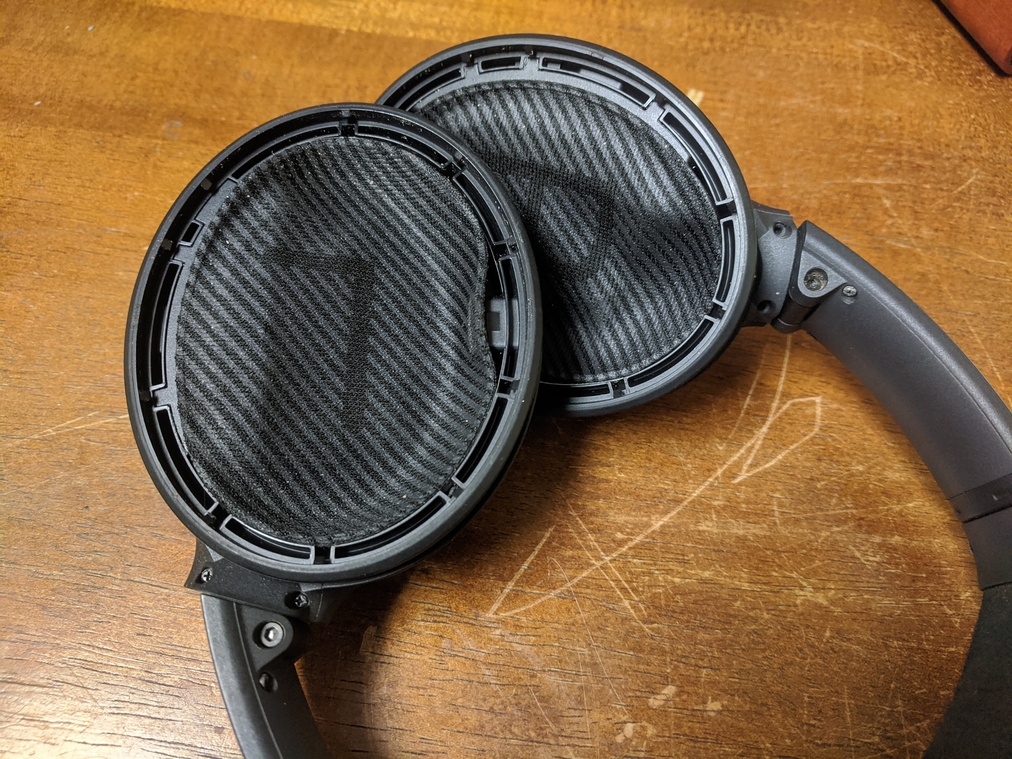 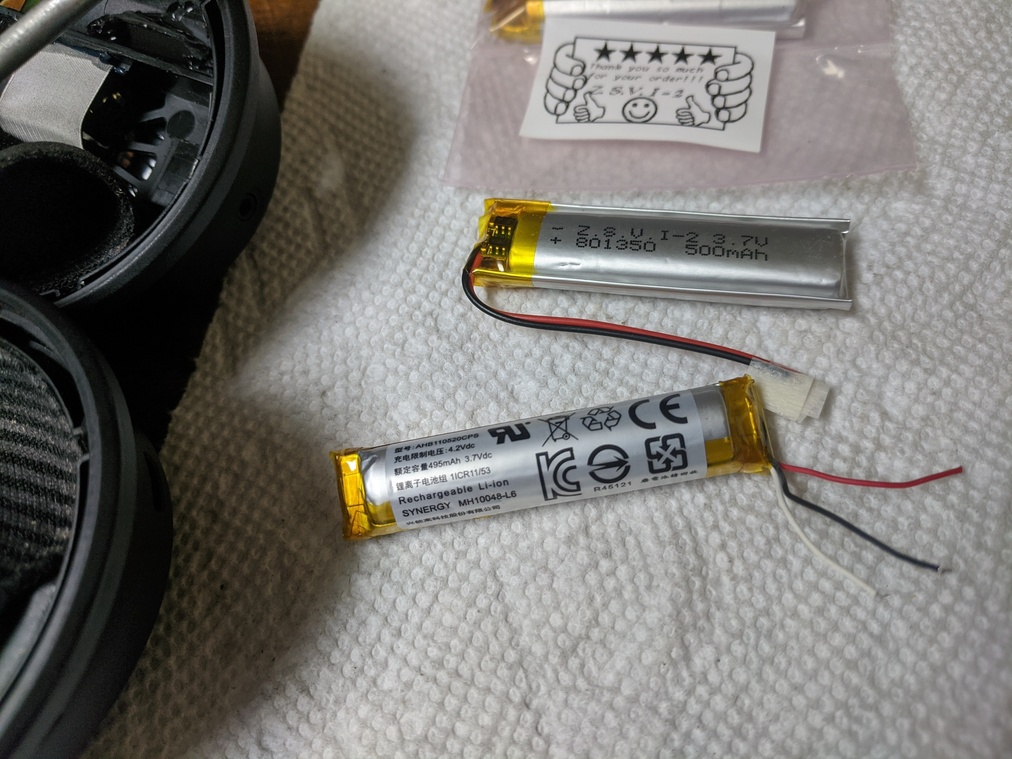 Suspecting an issue with the battery, I ordered what I determined a suitable replacement. Ultimately this wasn’t the issue, but it put me down a good path regardless.

In the end, the culprit was a cheap passive component: a failed capacitor shorting the protected 5 volt USB power supply to ground. However, the protection IC from Texas Instruments3 did its job marvelously. Whenever plugged in, the chip would continually reset due to over-current/thermal protections and the USB power consumption would fluctuate accordingly, up to nearly the full 2.5 watt programmed maxiumum. Isoprobyl alcohol, and my finger, told me the chip was also getting very hot.

I decided to revive the original Bose lithium cell, mainly because the replacements didn’t readily expose a temperature lead. The headphones appear to use this sensor as part of operation, operating improperly if not connected or shorted to ground.

Removing the film tape protecting the circuitry, I was able to charge the cell directly: it had depleted to 2.48 volts, and was brought above 3.3 volts. Even at this voltage, the battery leads still read zero volts; the trick was to “reset” the safety circuitry by momentarily connecting the negative lead directly to the cell’s kathode. After this reset, the battery leads reflected the cells voltage and works properly again. 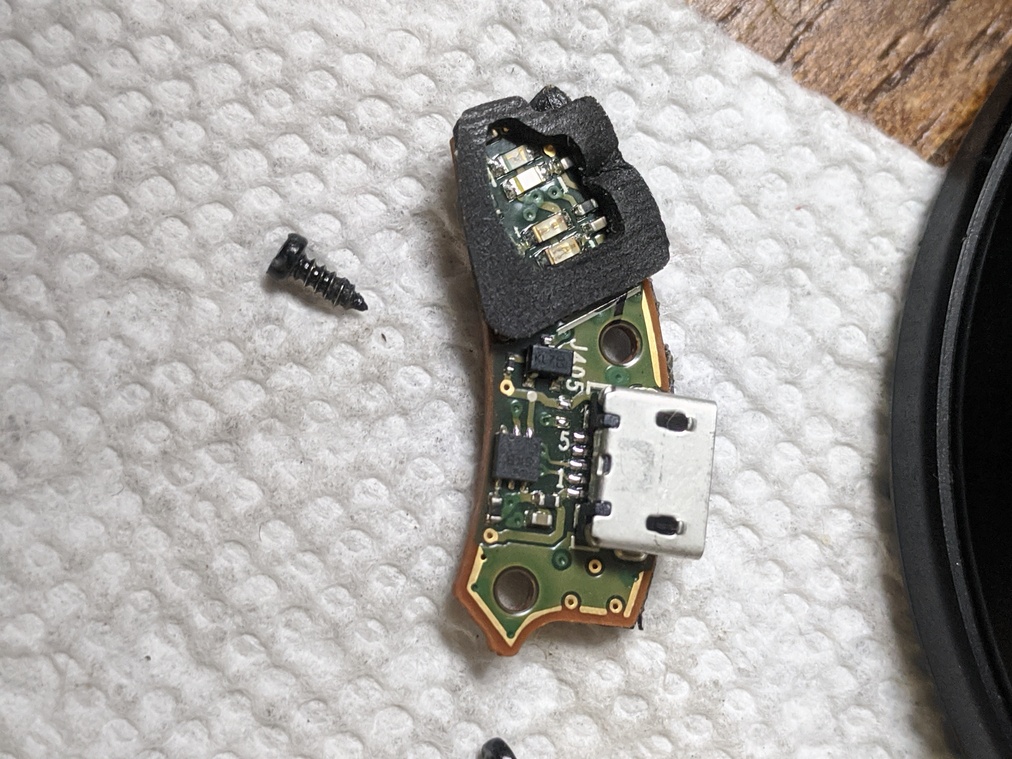 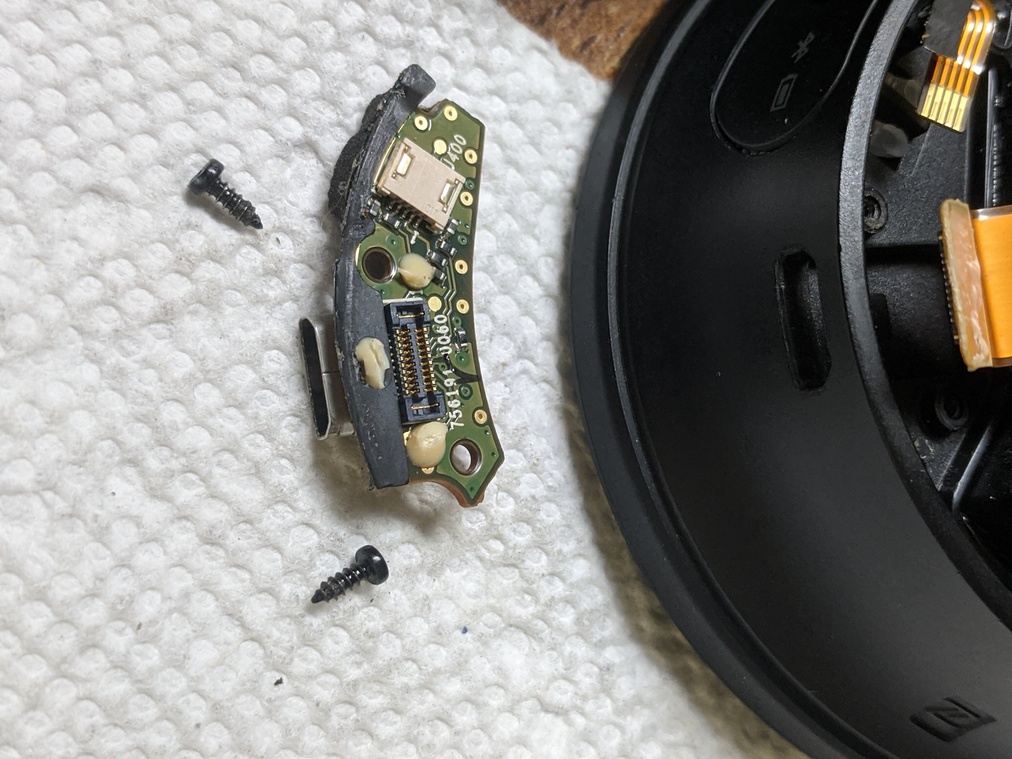 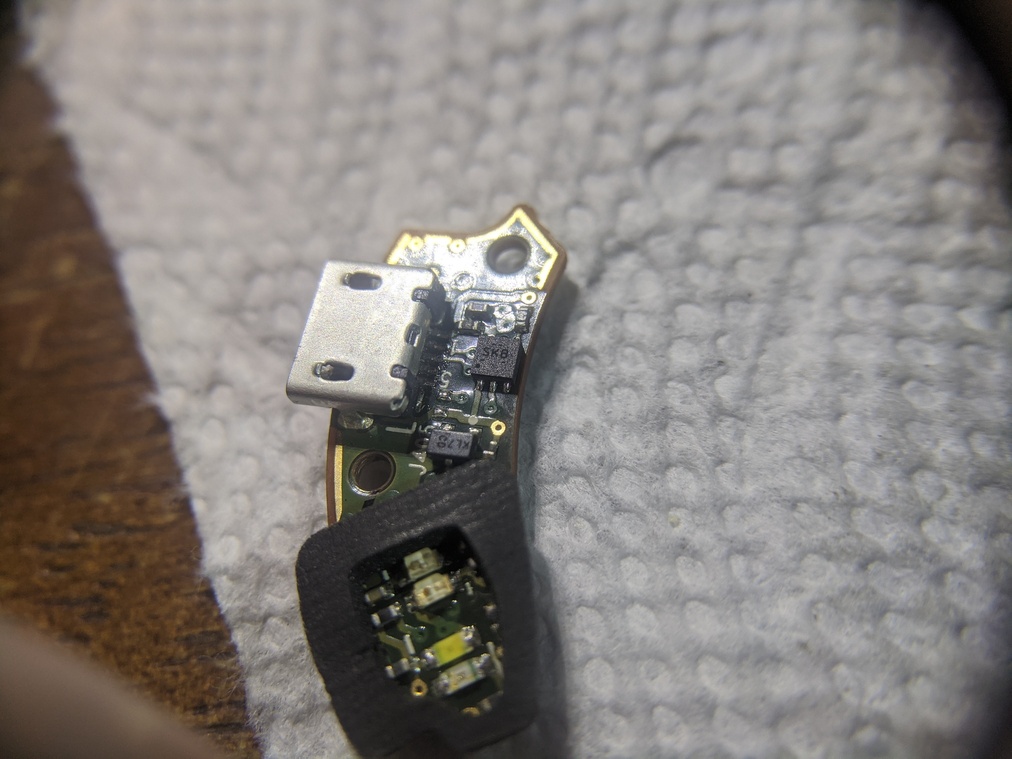 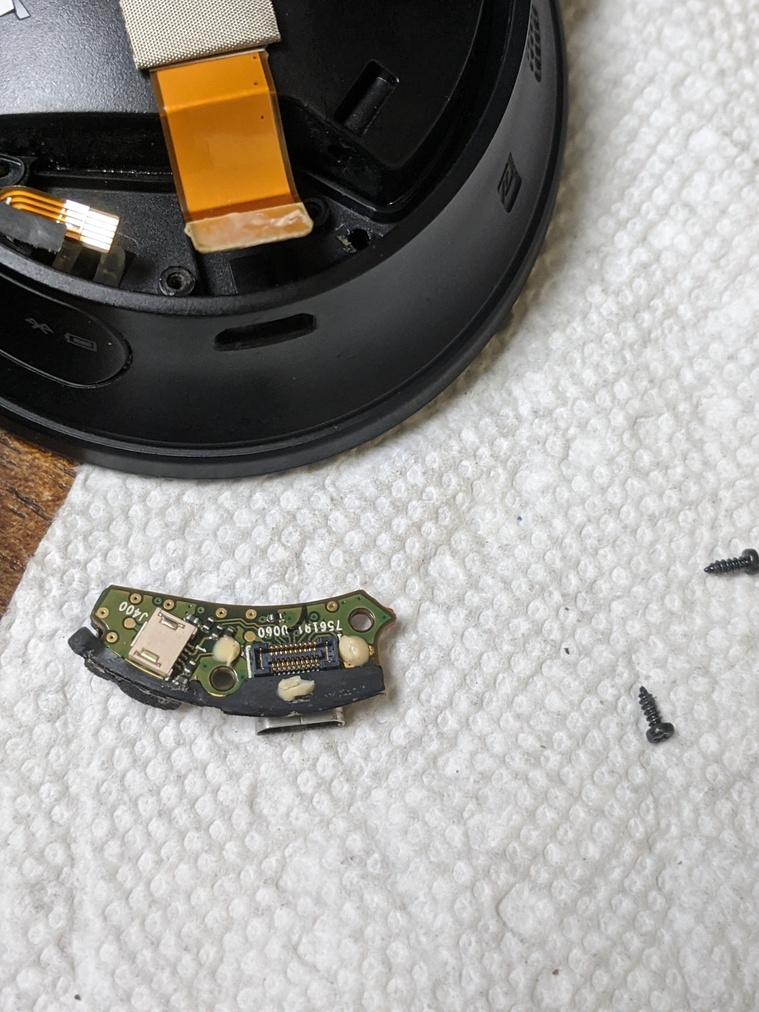 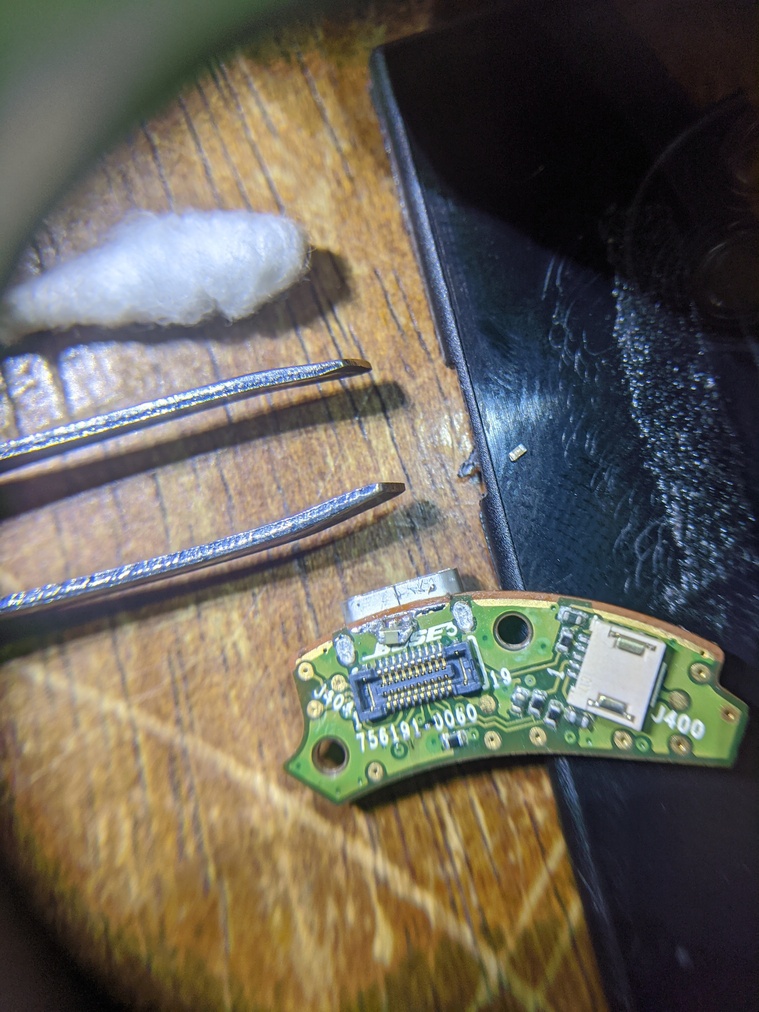 I’m not certain but I suspect the capacitor Bose chose here could be improved to avoid this failure. The reference application suggests a value well upward of 20 µF with higher values providing better protection: a faster drop in 5 V supply rail voltage upon bring-up due to charge-port input over-voltage/spike.

It seems Bose made an unnecessary trade-off in terms of footprint too: the small 0402 footprint capacitor likely didn’t have a large value, or traded substantially in terms of maximum voltage tolerance, given the apparent dielectric failure (short). I’ve tried asking Bose for this capacitor spec. but I’m sure it’ll be a while if ever a response arrives. Until, I’ve made due with what I have on hand: smaller capacitance but greater operating range, in a physically larger footprint. 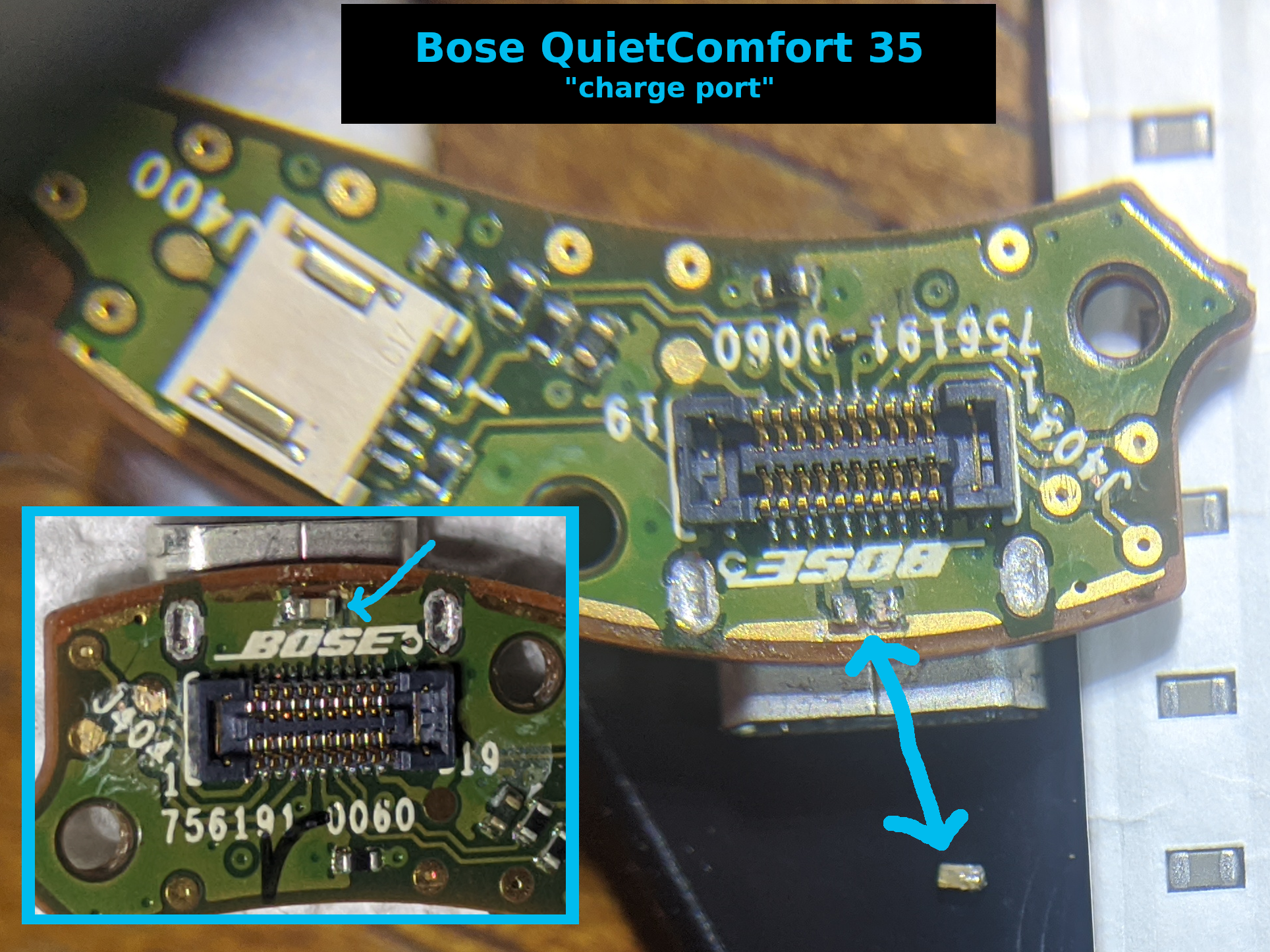